Note: If you’re trying to follow my work chronologically, this is really more like WGCNA 5 - I did a small recap of some WGCNA work in my December Goals post (the previous one).

Regardless, this post summarizes a few changes I’ve made to my WGCNA analysis recently. They are as follows:

As part of my WGCNA analysis (again, using signed networks), I wanted to examine Hematodinium levels within the crab. To get a number for this, I took the SQ mean from all runs for that crab. However, qPCR was ran on samples from Day 0 and Day 17, and often the Hematodinium level changed substantially between those two timepoints. Rather than averaging the SQ mean between Days 0 and 17 (if available for that crab), I decided it would be optimal to use Day 0 SQ mean only as my WGCNA input. This had two benefits:

To preserve previous runs (just in case I wanted to look at them again later), I put them in a subdirectory called “hemat_average”)

Prior to re-running WGCNA, I went back and looked at Pam’s qbit results. I’m glad I did, because I found an error in my sheet! Not sure where it originated (maybe simple copy-paste error or typo, maybe something in the project sheet I got from grace) despite poking around and trying to find the error in the original, but regardless, for Crab E, the SQ Mean values for Day 0 and Day 17 were reversed! Luckily not an issue for any analyses previously, but definitely good to catch because of the new analyses I’ll describe in the next section.

Again, I ran WGCNA on samples from all crabs on all days. Variables were crab, day, temperature (with pairwise comparisons and vs. all), Hematodinium level on Day 0, carapace width, and shell condition. Here’s the heatmaps from the complete, Tanner crab, and parasite transcriptomes, respectively: 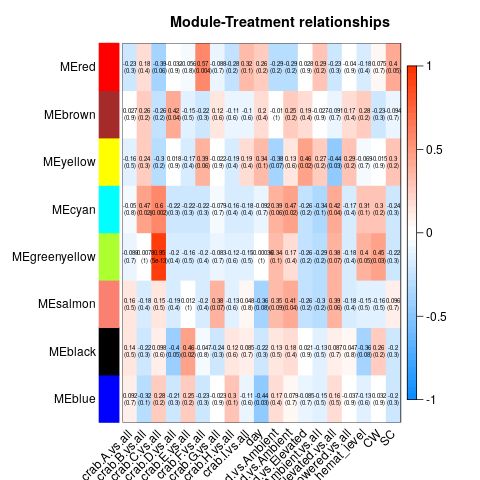 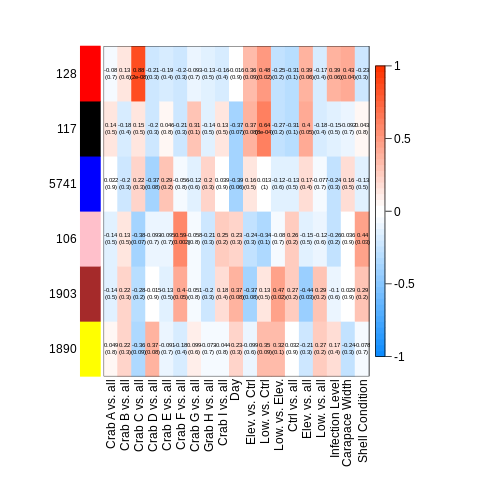 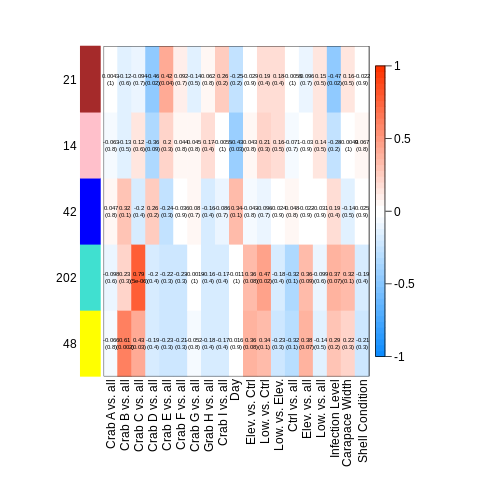 As before, I examined module/variable correlation when correlation was <= 0.05. If the correlation appeared to be predominantly due to the effect of a single crab, I discarded it. That left me with the following modules and correlations:

My next task is to run these back through GO-MWU to see if anything interesting pops out!

Previously, I treated infection level as a constant. However, we do have two timepoints here - the start and end of the experiment, Days 0 and 17. Therefore, it makes a whole lot of sense to examine change in infection level as a variable! There is a complicating factor. Since all elevated-treatment crabs died before Day 17 of the experiment, we only have qPCR data from a single timepoint. Therefore, I restricted this analysis to Lowered and Ambient-temp crabs only.

Otherwise, pretty much everything about my run setup was the same!

Naturally, removing Elevated-temperature samples decreased my sample size. Therefore, I ignored correlation between modules and variables other than hemat_diff. After all, I had already looked at them (and more accurately) in my previous run on all samples! 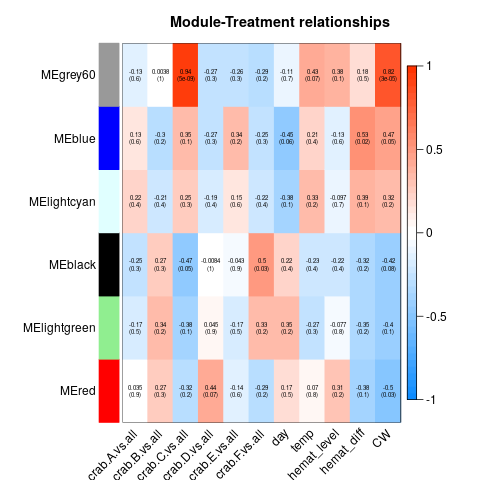 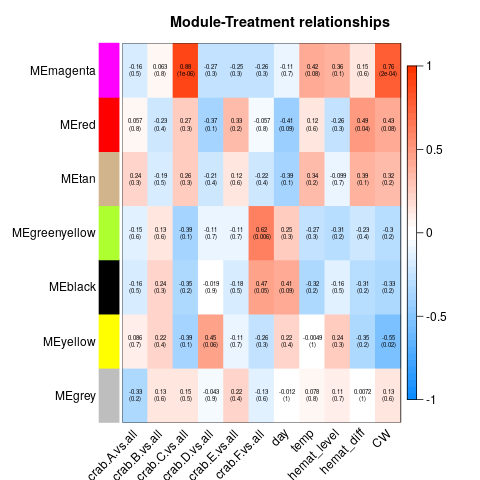 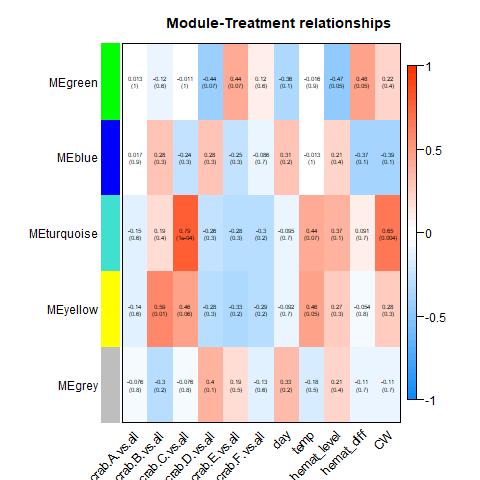 After discarding modules linked strongly to individual crab, as described above, this left me with the following modules associated with hemat_diff:

For all, trait is hemat_diff (I ignored any correlation with other traits for reasons described above).

Next step is to run these guys through GO-MWU to see if anything interesting comes out!

As I was going through my scripts and output folders, I noticed I had a whole bunch of old WGCNA runs. Most of them were outdated or irreparably broken for some reason or another. For instance, I did the following:

So yep, just a whole mess of mistakes! I removed irrelevant scripts and their outputs, and renumbered the existing scripts (remember, all of which begin with 5_) to fix this.