Happy holidays - first post of December! Took the first few days of the month off to head back to Cleveland (congrats on the wedding, David!). To recap, I’ve got two papers that I’m working on at the moment. First, a paper examining the relationship of various environmental and physical variables to visual BCS positive C. bairdi by using GLMMs on a huge ADFG dataset. This is the focus of most of my work at this point - I’m in the writing up stages! The second is a paper that uses RNAseq to examine the response of infected C. bairdi to short-term temperature changes. I’ve submitted this one to Frontiers in Marine Science, but still have edits to make. My to-do lists for each task is below:

Alright, that’s about it - let’s get started, and here’s to a productive month! 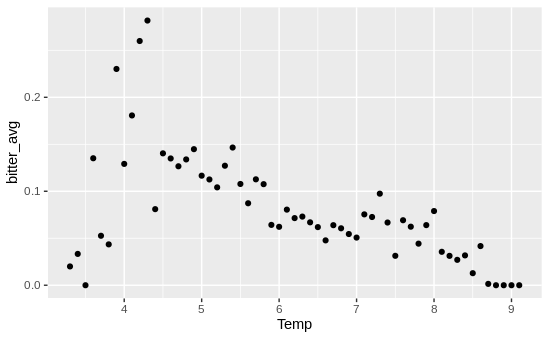 Naturally, my first thought was “oh no my conclusions are trash and my model is broken and I’m useless”. To test that assumption, I built a tiny model with just BCS status, temperature, and our random effects (year and site). That model showed that there was still a strong positive relationship between temperature and BCS status!

This seemed to indicate that one of the random effects was responsible here - in other words, temperature and bitterness within years or within sites might be positively correlated, even if negatively correlated overall. So I graphed the relationship between bitterness and temperature for each year, which gave me this graph 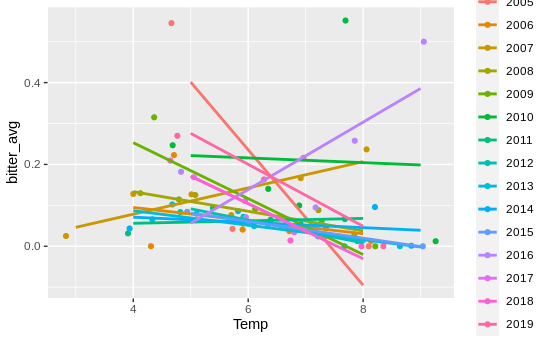 Basically, no relationship! I then moved on to site, and… 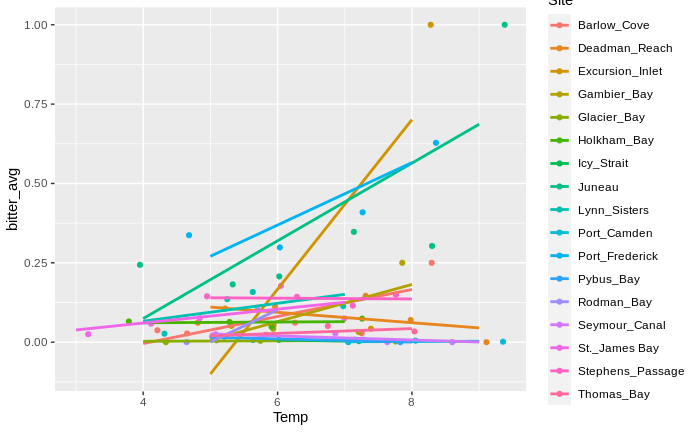 From this graph (which has one data point for each 1 degree interval per site), it looks like within the majority of sites, warmer waters = higher temperatures! In essence, the takeaway message seems to be:

At each site, warmer waters mean higher prevalence of BCS. However, warmer sites tend to have lower prevalences of BCS.

That’s definitely a more complex message than “warmer waters = more BCS”! I also need to do more of an in-depth dive to validate that. Next goal: create a separate graph of temperature vs. BCS prevalence for each site (with error bars!).